2014 WINNER for the EPIC eBook award for Science Fiction!

SYNOPSIS
On an Earth ravaged by climate change, and a disastrous
attempt to reverse it, human-dolphin hybrids called Aquarians have built
thriving reef colonies among the drowned cities of the coast. Now their world
is under siege from an enemy above the waves whose invisible weapon leaves no
survivors. Ocypode of Tillamook is an Atavism: half-human and half-Aquarian,
marooned in the genetic limbo between species. Only he knows why the colonies
north and south of Tillamook Reef have been destroyed, literally turned to
stone. Ocypode knows that Tillamook will be targeted next, but sharing the
reason might prove as deadly to Aquarius as the Medusa plague itself.
Ocypode and his Aquarian and human comrades flee into the
open ocean to escape Medusa, until another Aquarian’s treachery leaves them at
the mercy of a killer storm. Ocypode must pass through the Electric Forest,
where he faces nightmarish creatures and a legendary sea witch who becomes an
ally. Finally, he must confront the cyber-ghost of the human he most despises:
Peter Cydon, the Great Father who bioengineered the mutagenic virus that gave
birth to the Aquarian species. These unlikely allies provide the only chance to
stop the Redeemers, rogue scientists who are determined to resurrect the land
by slaughtering the sea. Even these allies will not be enough, and Ocypode must
decide whom to trust with a secret as lethal as any plague.
Where to Purchase Aquarious Rising
Amazon – Kindle Kobo B & N – Nook iBooks Lulu Paperback 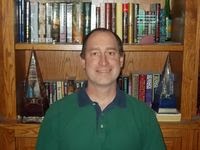 Brian’s Website / Goodreads / Facebook Brian Burt works as an information security engineer in West Michigan, where some of his most bizarre flights of fancy wind up in threat assessments.  He’s been blessed with a wife and three boys who tolerate his twisted imagination and even encourage it.  He enjoys reading, cycling, hiking, horseplay, red wine, and local micro-brews (so hopefully the virtues balance the vices, more or less).  At every opportunity, he uses his sons as an excuse to act like an overgrown kid (which is why his wife enjoys rum, school days, and migraine medication).Brian has published more than twenty short stories in various markets, including print magazines, anthologies, and electronic publications.  He won the L. Ron Hubbard Gold Award in 1992 for his short story, “The Last Indian War,” which was anthologized in Writers of the Future Volume VIII.  His story “Phantom Pain” received an Honorable Mention in The Year’s Best Fantasy and Horror, Tenth Annual Collection, edited by Ellen Datlow and Terri Windling.  He’s a card-carrying member of the Science Fiction and Fantasy Writers of America.  His debut novel,Aquarius Rising: In the Tears of God, won the 2014 EPIC eBook Award for Science Fiction. Book 2 of the Aquarius Rising trilogy, Blood Tide, is scheduled for release from Double Dragon Publishing in 2015.
Follow the entire Aquarious Rising tour HERE

Brought to you by Worldwind Virtual Book Tours